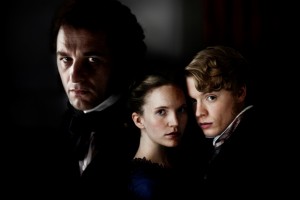 A new two part drama from the BBC aims to solve The Mystery of Edwin Drood. Dickens’ final and incomplete novel has been subject to many adaptations over the years, with various endings that guessed at what the great author intended. In the style of a psychological thriller penned by Gwyneth Hughes (Five Days, Miss Austen Regrets), this latest BBC adaptation focusses on choirmaster John Jasper’s (Matthew Rhys-Brothers and Sisters) obsession with his student, 17 year old Rosa Bud (Tamzin Merchant-Jane Eyre).

Rather than resolve his frustrated ambition and leave the stifling environment of his home city, Cloisterham, Jasper resorts to taking opium. As the drug slowly fractures his mind, he develops a murderous hatred for his nephew, Rosa’s love interest, Edwin Drood (Freddie Fox- Worried about the Boy).

A darker and more gripping adaptation than previously seen, the series is part of the BBC’s Dickens celebrations  of the bicentenary of his birth in 2012. Another BBC project is the new adaptation of Great Expectations.

Earlier in 2011, the production crew and cast arrived in Rochester to film scenes for the drama. Eastgate House, an Elizabethan mansion on Rochester High Street features in both the unfinished novel and the BBC adaptation. Formerly The Dickens Centre when it housed a Dickensian exhibition, it is now undergoing a £5M development programme which includes the restoration of the writer’s Swiss Chalet, a gift from lifelong friend John Forster for Dickens’ home at Gad’s Hill Place in Higham, where he worked also on his last and unfinished novel.

The misty marsh scenes at Riverside Country Park, which is in Medway and is a beautiful country park set over 100 hectares. There are many various habitats within the park, including mudflats, salt marsh, ponds and grassland, which provide a haven for wildlife.

Eastgate House was a the model for Westgate House in Pickwick Papers (1836) as well as the nuns’ house “a seminary for young ladies” in The Mystery of Edwin Drood (1870).

The site of Rochester Cathedral was also used in the production. Featuring in both the novel and the 1993 adaptation of The Mystery of Edwin Drood starring Robert Powell, the location has strong links to Dickens.  A memorial plaque can be found inside the Cathedral commemorating Dickens and a annual memorial service is held there during the Dickens Festival.

As the author’s spiritual home and the location for many of his stories, Rochester was the ideal place to film the drama. Some of his most famous characters lived in or visited the city, from Mr Micawber in David Copperfield, to Miss Havisham in Great Expectations, when Dickens found inspiration for “Satis House” at Restoration House in Rochester.

For more information about the programme http://www.bbc.co.uk/programmes/b019nky7

For more information about Rochester: http://www.visitkent.co.uk/destinations/rochester-chatham-and-gillingham/6533