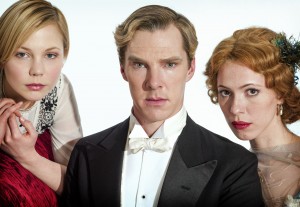 Parade’s End is based on Ford Madox Ford’s novels written between 1924 and 1928, with the screenplay adapted by renowned English playwright and screenwriter Sir Tom Stoppard. The costume drama features a stellar cast and is set in the midst of the First World War with a love triangle threatening to question everything lead character Christopher Tietjens stands for.

Shown in five parts, at the centre is English aristocrat Christopher Tietjens played by Benedict Cumberbatch (Sherlock, Warhorse, Tinker, Tailor, Soldier, Spy) who enters a turbulent relationship with socialite Sylvia played by Rebecca Hall (Vicky Cristina Barcelona, The Town, The Awakening). After Sylvia falls pregnant, Christopher decides to follow his morals and marry her, even though he is uncertain if the child is his.

The couple have a rocky relationship but Christopher vows to stay faithful to his wife, however when he meets strong willed suffragette Valentine Wannop (Adelaide Clemens – X-Men Origins: Wolverine) he finds himself falling in love with her. With his morals questioned, will he follow his heart, or stay with his wife?

The Parade’s End crew came to Kent last year to film scenes for the drama at the isolated and historic St Thomas A Becket Church in Fairfield, Romney Marsh, which also featured in the 2011 BBC adaptation Great Expectations (2011) starring Gillian Anderson and David Suchet.

Dorton House is a school in Sevenoaks run by The Royal London Institute for the Blind and caters for pupils with visual impairments. The Grade-II listed building saw its dining room transformed into a gentleman’s club, with the library serving as the Cabinet War Office and the Wedgewood Room as the bedroom of Valentine Wannop.

Dungeness and St Mary’s Bay also briefly feature in the programme, in scenes with a girl cycling past. Dungeness is a unique expanse of shingle beach with cottages and lighthouses and is a popular filming location having previously welcomed Doctor Who, Countrywise Kitchen and photo shoots for Vogue and Harrods Magazine. St Mary’s Bay is a delightful coastal village between Dymchurch and south to Littlestone and this is its big screen debut.