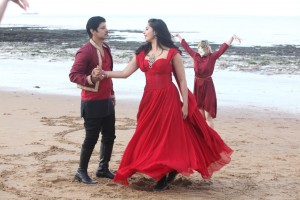 Thaandavam (2012) is a Tamil film directed by A.L. Vijay (Thalaivaa, Deiva Thirumagal) and is a mix of action, thriller and sci-fi with traditional Indian song and dance. The film stars some big Bollywood names and is about a blind man who has a special ‘Echolocation’ power on a revenge mission. It is one of the first Indian films to have shot action scenes using Hollywood technology and techniques. 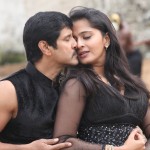 The Thaandavam crew came to Botany Bay back in April 2012, and the stunning beach was used for a dance sequence with a sand artist.

Botany Bay is in Thanet and is a popular film location due to its blue flag beach almost 200m long with stunning chalk cliffs and rock pools. Productions that have previously filmed at the location include Series 1 of the Sky Atlantic comedy Hunderby (2012), BBC drama True Love (2012), and ITV’s The Fixer (2008).

Thaandavam was released in UK cinemas on Thursday 27th September 2012. It is now available to stream on Netflix.