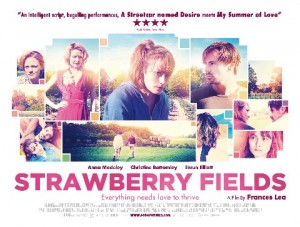 Strawberry Fields is another offering from the highly successful Film London Microwave Project and set for cinema release this week!

Directed by Frances Lea (Fugee Girl, Everyone’s Happy), Strawberry Fields is a tale of sibling rivalry and playing of mind games set in the strawberry fields of Kent. Starring Anna Madeley (In Bruges) Christine Bottomley (The Arbor, Shameless) and Emun Elliott (Prometheus, Game of Thrones) the film tells of the sexual awakening of Gillian during a long, hot British summer picking strawberries, where she meets and falls in love with fellow picker Kevin. But her idyllic new life is jeopardised by the arrival of her sister Emily.

This ‘terrific British debut’, (Jason Solomons, The Observer)   is released across the UK this week. There will be a special preview at BFI Southbank on 4 July. The film will also be shown at the London Film Festival in October this year.

Making the most of what Kent has to offer, Strawberry Fields features locations in the Kent countryside such as Foxbury Farm in Sevenoaks, Groombridge Railway Station and the Isle of Sheppey.

The Isle of Sheppey boasts some unique landscapes, such as salt marshes and shell beaches that have attracted many previous filmmakers, such as The Hide (2009) and Great Expectations (1989).

Foxbury Farm is a large fruit grower in Sevenoaks and was a new find for this project.