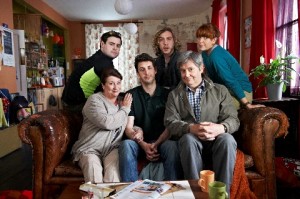 Big Bad World is a new Comedy Central series about university graduate Ben Turnbell played by Blake Harrison (The Inbetweeners), who returns home to Great Yarmouth to find that not much has changed in the three years he has been away.

As well as Blake Harrison, the show has many familiar faces from the world of comedy including Seann Walsh (Argumental), Rebecca Humphries (Come Fly with Me), Caroline Quentin (Men Behaving Badly) and James Fleet (Vicar of Dibley).

The Big Bad World team was welcomed to Ramsgate in May 2012 to film the pilot episode at various locations including Kings Street, Queens Street, High Street, Harbour Street and the  Port of Ramsgate. The Kent Film Office used its Filming on Highways Act 2010 for the production to close the Royal Esplanade in Ramsgate for a scene that sees main character Ben Turnbell (Blake Harrison) exit the beach soaking wet and getting into a car.

After the series was commissioned, the production came back to Kent in November 2012 and once again filmed in Ramsgate as well as the Port of Ramsgate and Herne Bay all doubling for Great Yarmouth in the series.

The scenes they shot in Herne Bay included Lucy at work trying to raise money for charity in the High Street as well as scenes by the seafront and bandstand.

In Ramsgate, the production once again made the most of the Kent Film Office’s Filming on Highways Act 2010 where they used traffic management to film scenes at The Old Haine Road in Ramsgate where a car travels over a speed bump and comes to a a sharp stop after the bump, stops for a while and then continues on its way. At Ramsgate Harbour they shot scenes where the characters arrive at the harbour and watch oil rig workers boarding a vessel.

Ramsgate is a beautiful coastal town which boasts a beach, amusements, arcades, shops, eateries and a theatre as well as the Thanet District Council managed Port of Ramsgate, the only Royal Harbour Marina in the country. Ramsgate has provided back drops for productions such as True Love (2012), Johnny English Reborn (2011) and Ruby Blue (2008).

Herne Bay is part of the Canterbury district in South East Kent and has a popular shingle beach, beautiful coastline and seafront gardens. The town also has many shops and eateries, amusement arcades, a windmill and some interesting architecture including a Victorian bandstand. Productions that have chosen to film in Herne Bay include Things I Haven’t Told You (2008) and French Dressing (1964).

The first episode of Big Bad World starts on Wednesday 21st August 2013 at 21:00 on Comedy Central.