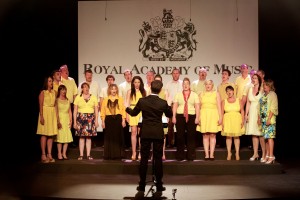 BBC2 series The Choir: Sing While You Work follows choirmaster Gareth Malone on his search to get Britain’s workforce singing as he aims to create distinctive choirs at five of the biggest businesses in Britain before they compete for the crown of best workplace choir.

In the first episode of the second series, Gareth visits employees at P&O which is the UK’s longest-running cross-Channel ferry service where he faces the challenge of getting the choir members together as they are all based in different locations – Dover, France and even at sea! Will they be able to rehearse enough to blow the competition out of the water?

In the final episode shown on Sunday 22nd December 2013, the P&O ferries choir went on to win the show – a massive congratulations to them!

From May to October 2013, the production followed Gareth and the P&O employees on their musical journey and filmed them at P&O ferries, The Port of Dover and Dover itself.

Dover is home to the infamous White Cliffs of Dover and Europe’s busiest passenger Port. The area has been used for many filming projects such as Sherlock Holmes: A Game of Shadows (2011) and The Other Boleyn Girl (2008).