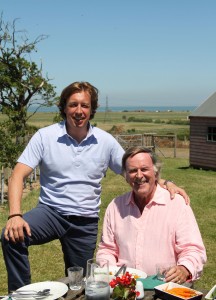 Television royalty, Sir Terry Wogan, and London Cabbie, Mason McQueen (A Cabbie Abroad), join forces to embark on the foodie’s ultimate adventure around the UK. Along the way, they check out the weird and wonderful British cuisine and look at how tastes have changed.

The 20 part series has taken its inspiration from the 1963 book, British Bouquet: An Epicurean Tour of Britain, by Samuel Chamberlain. Wogan and McQueen set off in Chamberlain’s footstep in search of the great British foods of today and exploring their social history. Sampling the foods mentioned in the book, they compare ‘then and now’ and piece together their evolution from all the knowledge preserved by the local people they meet.

Episode five focuses on Canterbury when the pair visit Canterbury Cathedral, The Goods Shed and Kent County Cricket ground. They also head to Whitstable, to sample local Oysters and Whelks and soak up the atmosphere of the working harbour and fishery before heading to The Sportsman, Seasalter’s local gastropub with a Michelin Star.

Episode nine sees the duo visit the historic town of Chiddingstone, where they sample the local Kentish ales at Larkins Brewery and The Pantiles, Tunbridge Wells and Rosemary Shrager’s Cookery School before heading to Penshurst Place.

Canterbury is a vibrant City which boasts a Cathedral, busy shopping areas, parks and open spaces. Nearby is the seaside town of Whitstable which has a strong arts and culture scene and offers a harbour, shingle beach and busy high street.  The area has previously featured on productions such A Canterbury Tale (1944).

Chiddingstone is a one-street Tudor village and has previously been used as a film location by productions such as A Room With A View (1986) and Elizabeth R (1971).

Tunbridge Wells is a large town situated in West Kent with a busy town centre and a period shopping area, The Pantiles,  offering a fascinating variety of small specialist shops, antique shops, open-air cafés, restaurants and bars. Previous productions that have been filmed in Tunbridge Wells include Britain’s Best Bakery (2012).

Penshurst Place is a Medieval and Tudor style manor house set in gorgeous parkland with formal Elizabethan gardens. Penshurst Place is a popular film location, having previously welcomed productions such as Wolf Hall (2015), The Great Fire (2014) and The Other Boleyn Girl (2008).