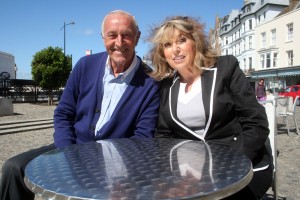 Holiday of My Lifetime Series 2, Len Goodman and Eve Pollard in Margate © BBC/RTRP

Strictly star Len Goodman returns to BBC One for another series of Holiday of My Lifetime. Each episode of the nostalgic show features Len and a celebrity reliving their British childhood summer holidays.

Kent will feature throughout the new series where Len Goodman visits Margate with and writer Eve Pollard and Herne Bay with presenter Lucy Alexander.

The seaside town of Margate has a delightful sandy beach, arcades, shops in Old Town and modern architecture in the form of the Turner Contemporary gallery. The town has also seen the revival of Dreamland, thought to be the UK’s first original pleasure park. Margate has previously featured on screen in productions such as Edge of Heaven (2014) and Only Fools and Horses: The Jolly Boys’ Outing (1989).