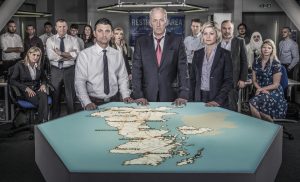 The final episode was partly filmed in Kent where the remaining two fugitives hid out in Tunbridge Wells and Isle of Sheppey the night before the final day. The fugitives must race to the finish line which is a boat moored on the Isle of Sheppey – will they make it in time or will the Hunters catch them?