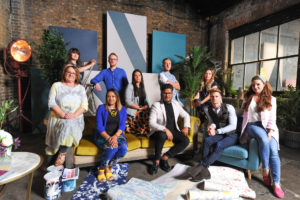 On Interior Design Masters, ten designers take on different design projects and compete with each other to gain a commission with a client for a job.

Among the contestants is Jim Biddulph, 32, from Margate. He left a previous job as a design writer to pursue his new career which was 10 years in the making and seized the opportunity to be involved in the programme. Fellow contestant Frank Newbold also boasts Kent connections as he previously lived in Rochester.

In Episode 7 , the semi final, the three remaining candidates are asked to each remodel a hairdressers in Whitstable High Street. Guest judge Lawrence Llewelyn-Bowen will help to decide whether the classic look of Len’s Barber Shop, the futuristic theme of Jelly Beanz or the industrial remodel of Edge is good enough to get the designer to the final.

Whitstable is on the north coast of Kent. The town is famous for its oysters, celebrated during the famous Oyster Festival during the summer.

The series was created by BBC 2 and Netflix, consisting of eight episodes.

Episode One of Interior Design Masters will be shown on BBC Two on Wednesday 14th August 2019 at 8pm on BBC2.