Kate & Koji is a six-part TV sitcom about a working-class woman played by Brenda Blethyn  (Vera (2011-2020), Pride & Prejudice (2005)) who runs an old-fashioned café in a neglected seaside town. Kate develops an unexpected and sparky friendship with Koji an asylum-seeking African doctor played by Jimmy Akingbola (In the Long Run (2018-19), Holby City (2006-2016)). Although from very different worlds, they are similar in ways which they do not recognise, including a dogged determination to never back down!

Kate’s resourceful nephew ‘Medium’ played by Blake Harrison  (The Inbetweeners (2008-2010)) is often on hand to act as peacemaker. Barbara Flynn (The Durrells (2016-2019)) also stars in Kate and Koji as Kate’s lifelong nemesis Councillor Bone, and Meera Syal (The Split (2018)) guest stars as an adversarial GP to Koji.

The series is directed by Ben Kellett  and written by Andy Hamilton  and Guy Jenkin. It is a Hat Trick Production for ITV Studios filmed on location in Kent and at Elstree Studios in front of a live audience.

The seaside café for the TV sitcom was filmed at Frasiers Pie and Mash Shop in Herne Bay, standing in for the fictional seaside town of Seagate. The production also filmed exteriors of The Divers Arms pub and various scenes around the promenade and pier and an exterior scene at Herne Bay industrial estate. A further sequence was shot on the Promenade featuring a storm and its after effects. 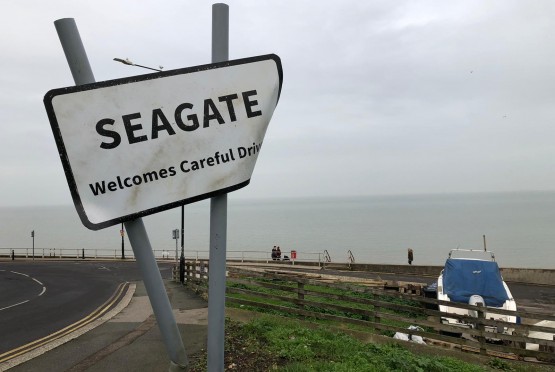 Herne Bay is a seaside town which has a pier and shingle beach and is set just outside of the historic City of Canterbury. Recent productions to film in the area include Blue Planet UK – Series 1 (2019), The 1900 Island – Series 1 (2019) and Coast vs Country (2016).