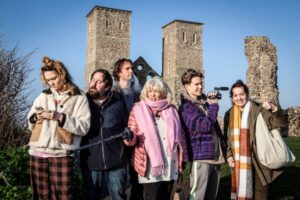 Pandemonium is a one-off TV drama in which the Jessops family, having had a terrible year due to the Pandemic, decided to take a holiday to boost morale, but it is October in Margate.

Reculver is a popular destination, comprising the atmospheric Reculver Towers and Roman Fort ruins and the surrounding country park and has previously featured in The Tunnel: (2017-2020) and The Medusa Touch (1978).

Walpole Bay is 400 meters long with a sandy beach, promenade and tidal swimming pool. Facilities include a cafe, jet ski hire, parking, golf, tennis and indoor bowls. It features in the production where a car drives off the seawall onto the beach below and has also featured in Liar Series 1 & 2 (2017)