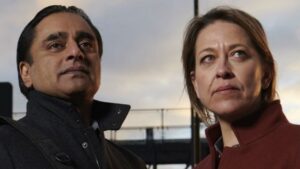 Unforgotten (2021) is a murder mystery series set in London, that follows two detectives, DCI Cassie Stuart (Nicola Walker) and DI Sunny Khan (Sanjeev Bhaskar) as they investigate and attempt to unravel unsolved crimes. Series 4 kicks off with the discovery of a thirty-year-old corpse, the perfect cold case for the detectives to solve.

Filming took place in historic Rochester City, featuring Rochester Cathedral. Another feature filmed in the city at the Royal Victoria & Bull Hotel was Last Orders (2002). Standing above the River Medway, in the centre of the city,  Rochester castle  has featured in Bollywood feature, Veer (2010) and the Dicken’s adaptation of The Mystery of Edwin Drood (2012).

The production also visited neighbouring Strood, across the River Medway, a popular location for those who enjoy water sports, fishing or even a boat trip along the river.

Series 4 of Unforgotten aired on ITV on Monday 22nd February 2021.