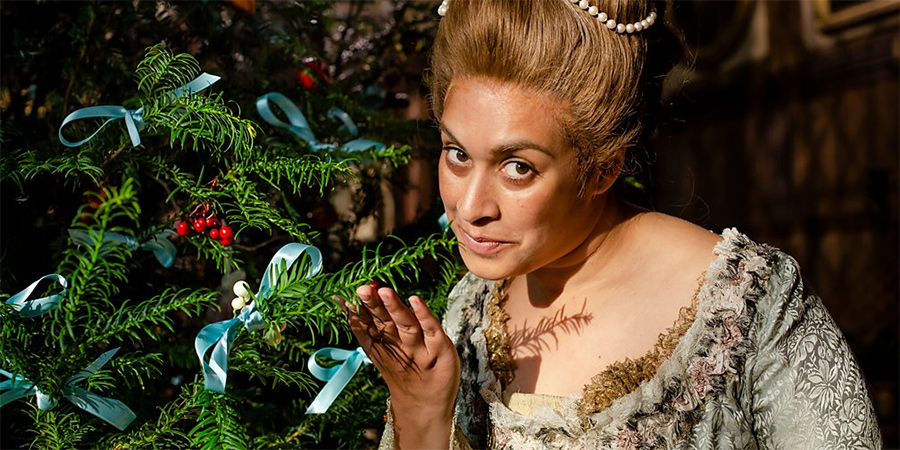 First premiering in 2009, the CBBC’s children’s TV programme Horrible Histories (2019-2021) is back for a Christmas special, which kicks off its ninth series. Based on the novels by Terry Deary, Horrible Histories is packed full of blood, battles and black humour; informing and entertaining young audiences with comedic historical sketches.

In 2015, the series returned with a revised format and a brand-new cast that includes Jalaal Hartley (Sugar Rush, The Borgias), Jessica Ransom (Doc Martin), Tom Stourton (About Time, All My Friends Hate Me) and Richard David-Caine (People Just Do Nothing, Class Dismissed) .Each episode centres on the life of one prominent historical figure.

In the Series 8 episode ‘Queen Vic’s Home Vids’ Victorian Filmmaker Williams Dixon (Jalaal Hartley) is shown filming whilst strapped to the front of a steam train. This comic re‑enactment scene, filmed on a green screen at The Historic Dockyard Chatham, is intercut with archive BFI footage.

During Series 9, the Dockyard appears in various episodes. The Tarred Yarn Store features in Episodes 4 , 10 & 13 doubling as a Victorian factory. The Ropery and Officer’s Terrace are granted a visit from Charles Dickens in Episode 6, who performs a Christmas sing-song. The Officer’s Terrace features once again in Episode 8 in a song about Georgian fashion.

The Historic Dockyard Chatham, established in the mid-16th century and located on the River Medway in Kent, is a highly desirable filming location for film and television crews alike. The site boasts a huge 80 acres of land, more than 100 Victorian, Georgian buildings and maritime spaces, with a history spanning over 200 years. The location has previously been home to several other historical productions, including Series 1 of Netflix’s Regency era Bridgerton (2020), Francis Lee’s 2020 LGBT romance film Ammonite, and Series 1 to 10 of the BBC’s 1950s drama Call the Midwife (2012-2021).

Allington Castle and Gardens feature in both Series 8 and 9, playing the role of Samuel Pepys’ home, The Tower of London, The Palace of Versailles and a Tudor Castle in Series 8, and doubling as The Royal Mint, an ancient Grecian market, the Palace of King Charles VI in France, the gardens of The Palace of Versailles, and a medieval dining hall in Series 9. Built in the 12th-century and located on the River Medway, Allington Castle is now privately owned and adorned with authentic Medieval tapestries and furniture. Once opening its doors to King Henry VIII, the Castle now plays host to film and TV crews, with productions such as The Zany Adventures of Robin Hood (1984), the 14th-century ABC drama Covington Cross (1992), and Series 2 of the American soap opera The Royals (2016), all making use of the Castle’s picturesque location.

The Christmas special of Series 9, featuring Kent locations, will air on CBBC on Friday 10th December 2021, with the rest of the series to follow in 2022. All episodes will be available to stream on BBC iPlayer.