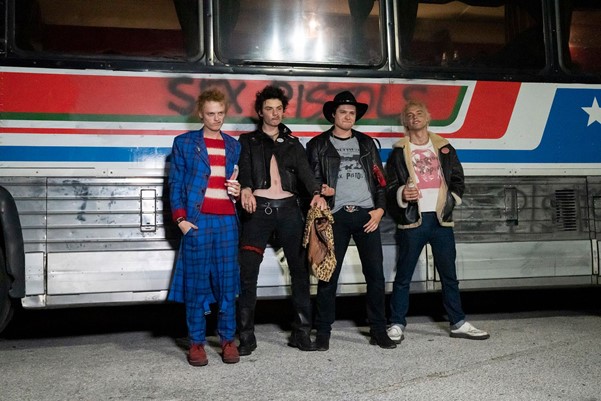 Pistol (2022) is a US produced six-part TV series based on the memoir of Steve Jones, the legendary Sex Pistols guitarist who helped usher in a punk revolution in Britain. Pistol was created by Craig Pearce (Moulin Rouge!, Will) and directed by Danny Boyle (Slumdog Millionaire, Yesterday) who also exec produces.

During filming, production visited Kent to film in Dover, Folkestone, Sandgate and Deal. The Grand Burstin Hotel in Folkestone was used to film a gig in a Victorian ballroom, whilst The Grand was filmed as a double for a Whitby hotel. The exterior of FOLCA (former Debenhams store) was filmed and Folkestone Railway Social Club. Various roads around Folkestone were also filmed for driving scenes.

Filming in Sandgate village took place at Riviera Car Sales, which was dressed as the 1970s, Sandgate High Street and Undercliff. In Dover, filming took place at Kings Hall and various nearby streets, as well as Dover seafront and Marine Parade. Nearby, The Citadel  was filmed as a stand in for HMP Bronzefield.

Folkestone is a seaside town with an elegant cliff top promenade, a coastal park, fishing harbour and Victorian cliff-top lifts. Previous productions which were based here include Back to Life (2019-2021), The Fight (2019) and The Tunnel: Sabotage (2016).

Sandgate village is in the Folkestone & Hythe district of Kent and features Martello towers, various boating clubs, antiques shops and a lift platform office that used to run in the Victorian times up Sandgate Hill to The Leas.

Dover is a popular filming location which also boasts the historic Dover Castle and the famous White Cliffs of Dover. Dover has featured in After Love (2021), The Rook – Series 1 (2019) and Missing (2009-2010). The Citadel, located on Dover’s Western Heights was constructed in the late 1700’s as a port of defence during the Napoleonic war. Most recently it has been used as a borstal, prison, and immigration detention centre up until its closure in 2015. It is now becoming popular as a filming location and has welcomed several productions over the past year, including Whitstable Pearl (2021) and various others soon to broadcast.

The coastal town of Deal has a long naval history and is one of the major cinque ports along the south coast. The Pier is a significant local landmark and public amenity offering excellent views of the town. It is internationally recognised as an angling venue.