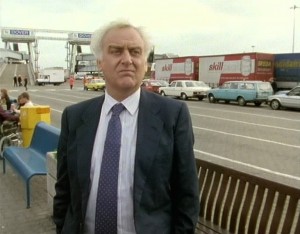 Deceived by Flight is episode 3, from series 3, of the well-known Inspector Morse series based on the novels by Colin Dexter where Morse is investigating the murder of a member of the old boys’ cricket team, who have reconvened before starting their European tour. However, after a second murder, it soon becomes clear that some members of the cricket club have another agenda when it comes to the tour. Detective Sergeant Lewis agrees to go undercover as a member of the team in an attempt to reveal the murderer.

Dover Priory Station and the Port of Dover both feature towards the end of the episode when the cricket team arrive in Dover, with the intention to catch a Ferry, to begin their European tour.

The Port of Dover in Kent is the UKs busiest passenger Port and the coastline is well known for its white cliffs. Dover’s Port has previously featured in Johnny English (2003), Sherlock Holmes: Game of Shadows (2011) and more recently in Sky Atlantics drama, The Tunnel (2013).

Deceived by Flight first aired on the 18th January 1989 and is now available to buy on DVD.