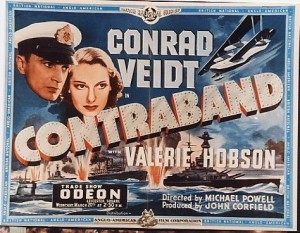 Set in early World War II, Contraband (1940) is about a Danish sea captain, delayed in a British port when a blackout occurs. The darkness brings chaos with smugglers and spies wanting to take advantage and the captain is forced to participate in a game of cat and mouse through the dark streets of London looking for important papers that belong to the ship. However, he discovers something a lot bigger than a few thieves trying to make a quick profit.

Directed by Michael Powell (A Canterbury Tale (1944), The Red Shoes), the film stars Conrad Veidt (Casablanca, The Cabinet of Dr. Caligari), Valerie Hobson (Kind Hearts and Coronets (1949), Great Expectations (1946)) and Hay Petrie (One of Our Aircraft is Missing, Crimes at the Dark House).

Ramsgate, particularly the harbour and railway station, doubled as the fictional town Eastgate-on-Sea in the film.

Situated in East Kent,Ramsgateis a beautiful coastal town, home to the Port of Ramsgate, the only Royal Harbour Marina in the country. The area also boasts a beach, amusements, arcades, shops, restaurants and a theatre. Ramsgate has been used as a film location for Eastenders (2015), Big Bad World (2013) and Johnny English Reborn (2011).

Contraband was released on Saturday 11th May 1940 and is now available to purchase on DVD.