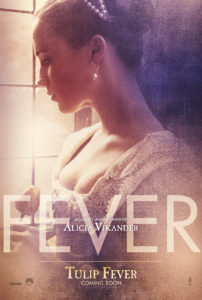 Tulip Fever (2018) is a film adaptation of Deborah Moggach’s romantic novel of the same name, set during tulip mania in early 17th century Amsterdam. The story focuses on artist Jan Van Loos (Dane DeHaan) who falls in love with Sophia (Alicia Vikander), a married young woman when he is commissioned to paint her portrait.

The film is directed by Justin Chadwick (The Other Boleyn Girl (2008), The First Grader) with Sir Tom Stoppard (Shakespeare in Love, Enigma) adapting the novel for the big screen.

Tulip Fever is released in cinemas on Friday 7th December 2018 and is available on DVD.