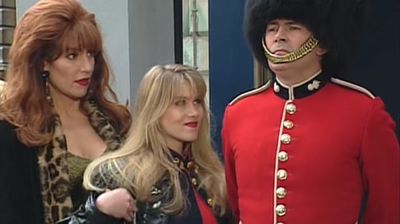 Married… with Children (1987-1997) is a US sitcom which follows the Chicagoan Bundy family, consisting of hard luck shoe salesman Al, his lazy wife Peggy, their attractive but dumb daughter Kelly, and their smart but unpopular son Bud. The three-part finale of Season 6 sees the Bundy family going on a free trip to England that turns out to be the cover for a murder plot.

The three-part finale was filmed in the Kentish village of Chilham, which doubled as the fictional village of Lower Uncton. Chilham has featured in various other productions, including A Canterbury Tale (1944), Emma (2009) and Chickens (2011).

Chilham Castle also features throughout the three episodes as the castle the Bundy’s stay in. Originally built in 1616, Chilham Castle is a Jacobean manor situated in the heart of Chilham, with extensive parklands, stables and lake. Previous productions to have shot on the castle’s grounds include Episode 9 of Moon and Son (1992), the Series 1 episode of Dempsey and Makepeace “Cry God for Harry” (1985), and Marple: The Moving Finger (2006).

The Season 6 finale of Married… with Children began airing on Sunday 3rd May 1992 and the final episode aired on Sunday 17th May 1992.