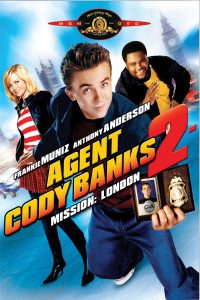 Frankie Muniz (Malcolm in the Middle, My Dog Skip) stars as Agent Cody Banks alongside Anthony Anderson (Transformers, The Departed), Hannah Spearritt (Primeval, Seed of Chucky) and Keith Allen (Trainspotting, The Others).

The Gilt Hall at Cobham Hall was used as a film location for Agent Cody Banks 2: Destination London doubling as the Queen’s gift room at Buckingham Palace and features at the end of the film where Cody Banks (Frankie Muniz) fights Diaz (Keith Allen) in a room full of treasures.

Cobham Hall is an outstanding private school in a historic house with surrounding parkland and includes a ballroom, library, courtyards and sports facilities. It has previously been used as locations for Hetty Feather (2015-2016), Wild Child (2008) and Bleak House (2005).

The film was released 26th March 2004 and is now available on DVD.