This independent UK film tells the story of a woman who sets out to track down her birth mother and seek revenge after being abandoned at birth. 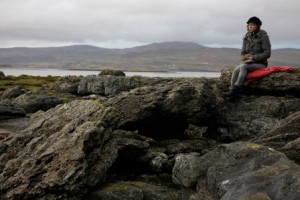 Natalie Press in The Island sitting on a rock © Hopscotch Films

In cinemas from April, this psychological drama is based on the acclaimed novel by Jane Rogers. Produced by Kent based film producer Charlotte Wontner, the Kent Film Office supported the feature and helped with the local aspect of the shoot.

The film has been directed by Brek Taylor and Elizabeth Mitchell who describe it as ‘a haunting tale of yearning, retribution and redemption’.  The main character, Nikki Black, was abandoned at birth and has spent most of her life in care, using fairy stories as her escape.

She is incapable of love and desperate for revenge, so she sets out to find her mother and ultimately kill her.

However, when she finds her parent on a remote Hebridean island, she also gets to know and like her half-brother, Calum. Plenty of drama follows as her murderous paranoia intensifies.

Gravesend Promenade now known as the Gordon Promenade and provides extensive panoramic views of the River Medway; while Somerhill School is a Grade I Jacobean mansion set in 150 acres of beautiful parkland.

The historic town of Gravesend is situated in North West Kent and has exceptional transport links up to London. The area has previously hosted productions including  The Interceptor (2015), Babylon (2014) and Great British Railway Journeys (2014).