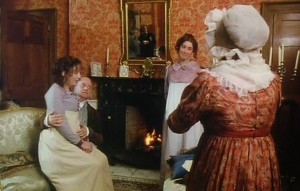 French and Saunders – Pride and Prejudice screenshot at Finchcocks © BBC

The show aired for seven series between 1987 and 2007 and became a fan favourite with its hilarious sketches including many film & TV spoofs with special guest stars and musical video parodies.

Series 5 episode 6, features the sketch “Behind the Scenes: A Classic in the Making” which is a satire about the filming of period TV dramas, in particular Pride and Prejudice and was filmed at Finchcocks in Kent.

Finchcocks is an early Georgian Manor in the Tunbridge Wells district of Kent and boasts a beautiful garden with extensive views over hop gardens and farmland, as well as being the home to an impressive collection of early instruments. The area has previously featured in Terry and Mason’s Great Food Trip (2015) and Hunted (2012).

The Kent episode of French and Saunders aired in 1996 and is now available to buy on DVD.