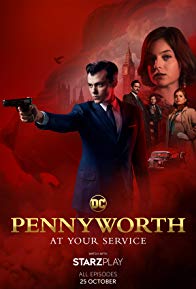 Pennyworth tells the origin story of Alfred Pennyworth a former special‑forces soldier living in London in the 1960s and how he came to work for Bruce Wayne’s father, Thomas Wayne.

Production visited The Historic Chatham Dockyard for filming where exterior scenes were shot around the Ropery, including a chase scene on the roof, Old Pay Office, Admiral’s Office and Anchor Wharf to stand in as 1960s London.

The Historic Chatham Dockyard is a historic tourist attraction on the site of a former Royal Naval Dockyard and has been the location for several recent productions set in the 1950s and 1960s including Call the Midwife (2018) and The Crown (2016).

Pennyworth Series 1 was released on Starzplay on 25th October 2019.