David Suchet as Hercule Poirot in a Snowy Chilham © ITV

In 1995 Hercule Poirot (David Suchet) visited Chilham in Kent for a further instalment of his adventures as written by Agatha Christie.

When everyone is gathered, Simeon hints at changing his will and favouring the newcomers Harry and Pilar . The scene is set for a power game with deadly consequences and when Simeon is mudered, Chief Inspector Japp (Philip Jackson) calls upon Poirot to investigate.

For this drama, the pictureque Kentish village of Chilham was transformed into a winter wonderland. A layer of snow covered the beautiful timber framed houses lining the square and the approach to Chilham Castle, which represented the family home.

Although it was the first time that the picturesque village was used as the set for an Agatha Christie adaptation, it wouldn’t remain the last as  Miss Marple – The Moving Finger was also filmed there in 2005.  Other filming projects which have filmed in Chilham include Channel 4 comedy Chickens (2011) and BBC’s Emma (2009).

Hercule Poirots Christmas was first shown in 1995 and is now available to buy on DVD. 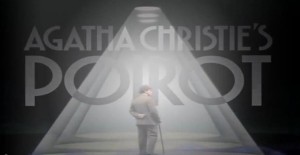