Produced and commissioned by Artangel in collaboration with Channel 4 and the Arts Council UK, EXODUS is a retelling of the Old Testament story of Moses’ search of the Promised Land in a contemporary setting. Filmed entirely in Thanet, the feature length drama is directed by Penny Woolcock, featuring artwork by Anthony Gormley (Angel of the North).

The film stars Bernard Hill (Lord of the Rings, Titanic) as the Pharaoh and Ger Ryan (Queer as Folk, Fat Friends) as his wife. Moses is played by Daniel Percival (Vital Signs) and Zipporah by Clare-Hope Ashitey (Children of Men). All other characters, as well as the supporting cast, were played by people from Margate and the Isle of  Thanet who also assisted behind the scenes. 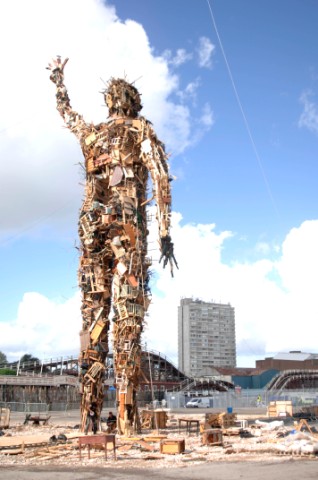 A highlight of the film is ‘Exodus Day’ which culminated in the burning of ‘Waste Man’ a 25 metre structure made of unwanted rubbish by artist Anthony Gormley. It also featured a performance at Margate’s Winter Gardens by local musicians, performing songs written exclusively for Exodus by artists like Rufus Wainwright, Laurie Anderson, The Tiger Lillies and Imogen Heap. The theme for he music were the ten Biblical plagues: Blood, Frogs, Lice, Death of ivestock, Boils, Hailstones, Locusts, Darkness and death of the first born

The entire project revolved around the involvement of the local community including students and staff from Margate Adult Education Centre. The students took on speaking roles and helped to make the props and sets for the film in their classes. Programme manager, Viv Smith, even abseiled Anthony Gormley’s Waste Man to help in its creation.

The crew of Exodus were delighted at the help they received and gave their thanks in the credits of the film for KAES, the students in the film and the tutors who help build the sets and worked on textiles.

Margate is a delightful seaside town with a sandy beach, harbour, arcades, and period housing. The area has been used for filming by projects including True Love (2012).

Exodus premiered at the 64th Venice Film Festival and will be screened in Cinemas and on Channel 4  on Monday 19th November 2007 at 10pm.