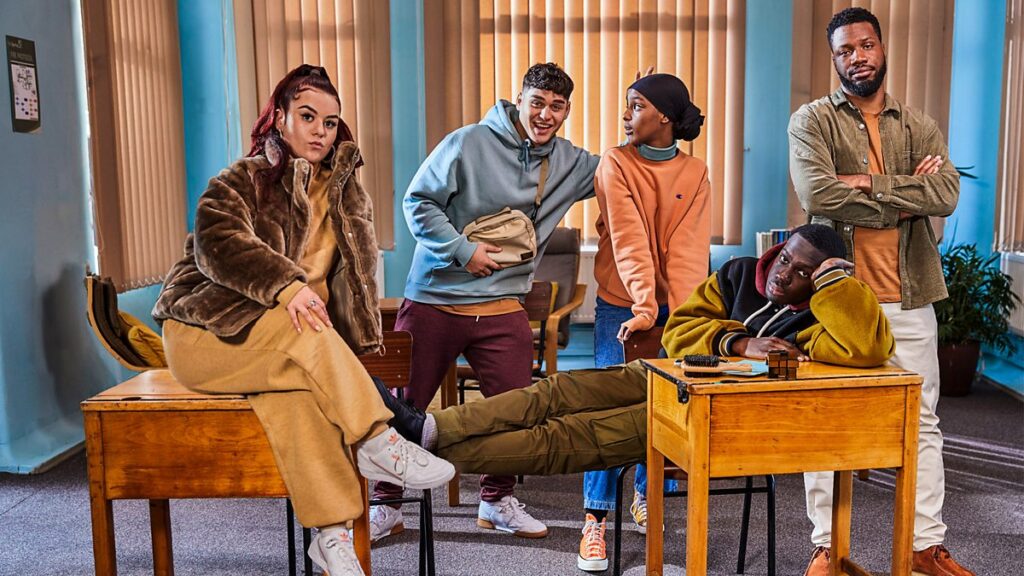 From left to right: Pia Somersby as Belle, Jaye Eservas as Halil, Kosar Ali as Hanna, Michael Boahen as Jaeden, and Tom Moutchi as Anthony in the pilot episode of PRU (2022) © BBC Three / Fully Focused Productions

PRU (2022) is a BBC Three four-part comedy series about a group of 15-year-old teenagers stuck in the Pupil Referral Unit, a school for excluded kids. Each episode is told through the eyes of the four teenagers as they struggle to navigate the world of adolescence.

Production visited Kent in January and February 2022 to film various scenes at Blue Bell Hill in Aylesford, Carroty Wood, and The George and Dragon Pub in Tonbridge.

Blue Bell Hill is a stunning nature reserve located in Aylesford, with panoramic views across the Weald. Aylesford is a picturesque village located on the banks of the River Medway and complete with a Norman Church and Victorian houses. Previous productions to shoot in Aylesford include Half a Sixpence (1967) and Rustom (2016).

Carroty Wood is situated just outside of Tonbridge. The activity centre is enclosed in 58 acres of mature woodland with plenty of natural habitat and wildlife. Tonbridge is a riverside town with picturesque castle, churches and historic buildings. Previous productions to have filmed in Tonbridge include Missing (2009-2010), Making Noise Quietly (2019) and The Larkins (2021).

PRU will be released as a box set on BBC iPlayer on Thursday 26th March 2022.