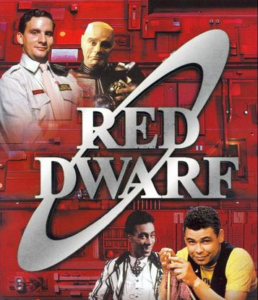 DVD poster for Red Dwarf – Gunman of the Apocalypse (1993) ©IMDb

In Gunmen of the Apocalypse (Season 6, Ep 3), cult Sci-fi TV Series Red Dwarf visited Kent.  The crew of Starbug intercept a battleship carrying murderous cyborgs called “Simulants” which infect the Starbug with a virus. Kryten (Robert Llewellyn) deliberately infects himself with the virus to find an antidote. Rimmer (Chris Barrie), Lister (Craig Charles) and Cat (Danny John-Jules), end up in the computer simulation of a Wild West town, facing four outlaws, the Four Horsemen of the Apocalypse, whom they must defeat.

The computer simulation was filmed in Laredo Wild West Town, in North Kent, claiming the only Wild West barn location not in the United States. It has previously been used in the feature film about J.M. Barrie – Finding Neverland (2004)

Red Dwarf Gunmen of the Apocalypse was first shown on television in 1993.