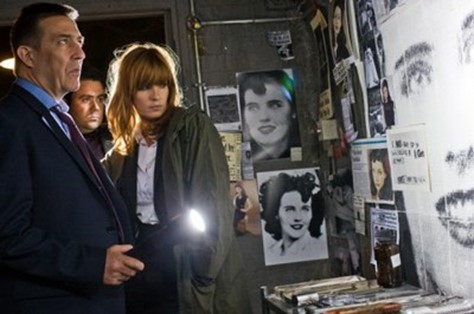 Ciaran Hinds and Kelly Reilly in Above Suspicion (2010) © ITV

Based on the series of books by Lynda La Plante, Above Suspicion (2009-2012) was an ITV crime-drama series about a female detective trying to survive in a male-dominated industry. Each series focuses on a different homicide case, as the team desperately try to track down the killers.

Series 2, titled ‘The Red Dahlia’, sees the return of ambitious female detective Anna Travis (Kelly Reilly) and her boss, Detective Constable James Langton (Ciarán Hinds). Together they must tackle their most terrifying case to date: the discovery of a woman’s mutilated body in the Thames. They soon realise they face a copy-cat killer who re-enacts the murders of the infamous 1940’s Black Dahlia case.

The production came to Westgate-on-Sea in Thanet to film various scenes for Episodes 1 & 2. The promenade features in various flashback sequences which see Louise Pennel (Ty Glaser) looking out to sea. The exterior of St Cecelia’s House on Sea Road doubled as the exterior of Mrs Pennel’s (Hildegard Neil) home, and the interior was filmed at West Bay House.

Westgate-on-Sea is a civil parish on the north-east coast of Kent. It is a charming Victorian town with two fantastic blue flag beaches – West Bay and St Mildred’s Bay. Previous productions to have filmed in Westgate-on-Sea include True Love (2012) and Series 2 of Humans (2016).

Above Suspicion: Red Dahlia – Part 1 aired on ITV on Monday 4th January 2010, with the subsequent episodes airing on the following days.