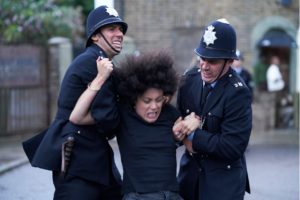 Production visited Canterbury Prison to shoot for two days. Canterbury Prison was sold to Canterbury Christ Church University in 2014 and is now part of the university campus. Most recently BBC TV Drama The Capture (2019) filmed at the Prison. The surrounding area of Canterbury is also popular for filming with previous productions including The Rizen (2017) and The Tunnel: Sabotage (2016).