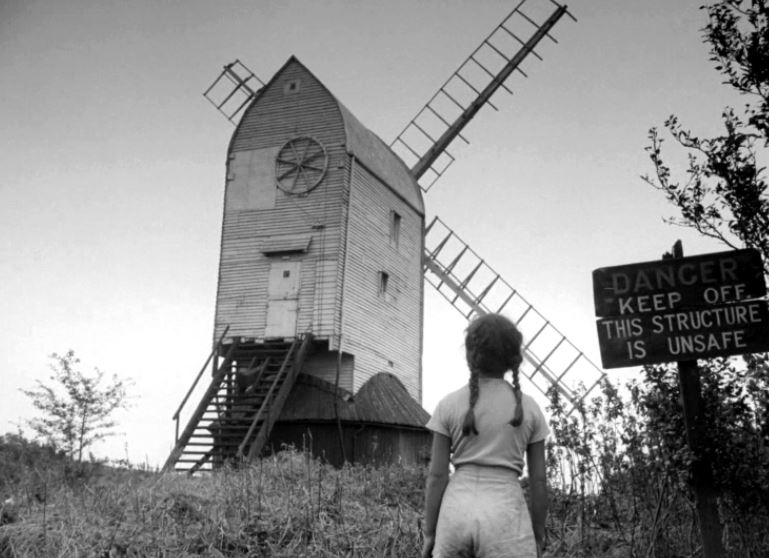 Based on the 1952 novel ‘The Hop Dog’, Adventure in the Hopfields (1954) is a British children’s film about a young girl called Jenny Quin who accidently breaks her mother’s favourite ornament and, in order to raise money to replace it, runs away to the country to go hop-picking.

Directed by John Guillermin (The Towering Inferno, Death on the Nile) and adapted for the screen by John Cresswell (Yield to the Night, Port Afrique), Adventure in the Hopfields stars Mandy Miller (Compact, Child in the House) as Jenny Quin, Harold Lang (Gary Halliday, The Quatermass Xperiment) as Sam Hines, Mona Washbourne (My Fair Lady, Stevie) as Mrs McBain, Melvyn Hayes (The Dreamstone, It Ain’t Half Hot Mum) as Ned Reilly in one of his earliest roles, and Léon Garcia as his brother Pat Reilly.

Triggs Farm in Goudhurst was the main setting for the film, doubling as Longrope Camp where the hop-pickers stay, as well as the hopfields, orchard, and Barden train station. Goudhurst High Street also features in a scene where Sam and Jenny go shopping for a replacement ornament, as well as St Mary the Virgin church featuring in a scene where Laura McBain (June Rodney) gets married. The now derelict Goudhurst Railway Station and Nutley Windmill also feature throughout the film.

Goudhurst is a village in Kent about 12 miles south of Maidstone. It stands on a crossroads (A262 & B2079), where there is a large village pond. Hop-picking has an extensive history in Goudhurst and was an annual event in the village up until the 1950s. The village is home to Finchcocks, a Georgian manor which features in The Amazing Mr Blunden (2021) and a French and Saunders (1996) Pride and Prejudice sketch.

In 2002, a copy of the film was rediscovered in Chicago, USA and the film was subsequently screened in Goudhurst Village Hall for the first time in almost 50 years on Friday 8th March 2002.

Adventure in the Hopfields was released in 1954. It is currently available to watch for free on BFI Player.