The Shadow in the North © BBC 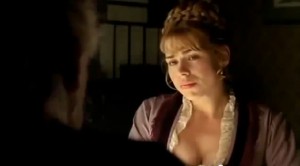 The Shadow in the North is the second of the Sally Lockheart Mysteries and follows Sally, who, with the help of her detective friends, investigates her client’s losses of vast sums of money due to a vanished steam ship. The team find out that a mysterious stage magician and a psychic medium are part of the mystery, along with a very old enemy of Sally’s.

This BBC TV Movie is the second Sally Lockheart Mystery and is based on the 1986 novel of the same name by English author Philip Pullman.

The Historic Dockyard in Chatham doubled as the exterior of North Star Castings gun shop, as well as London street scenes.

The Historic Dockyard in Chatham boasts many interesting features such as the HMS Cavalier, period buildings, cobbled streets and newly reconstructed smithy. Many productions have been shot at this location including Dom Hemingway (2013), Sherlock Holmes (2009) and Oliver Twist (2007).

The Shadow in the North was shown on the BBC in December 2007 and is now available to buy on DVD.