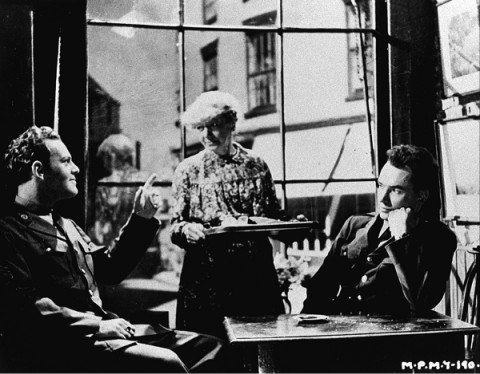 Inspired by the Chaucer tales, this classic film by cinema legends Powell and Pressburger tells the story of a modern day pilgrimage to the beautiful city of Canterbury. Set in the 1940’s amidst the drama of World War II, the film opens with the chance meeting of American G.I Bob Johnson (John Sweet), Land Girl Alison Smith (Sheila Sim) and British Soldier Peter Gibbs (Dennis Price).

Another local Kent village, Fordwich was used for exterior shots of “Chillingbourne” village. Before the Wantsum Channel, a stretch of water that divided The Isle of Thanet from Kent, dried up Fordwich was the main port serving Canterbury. Filmed at Denham Studios and on location around Kent, the film is a visually stunning walk through some of the most scenic locations in the county. Selling Train Station cameos as Chillingbourne Station, where the three main protagonists first meet.  Several Kentish villages were used for the fictional location of Chillingbourne.  The historical village of Wingham was established in Roman times but it has been inhabited since the Stone Age.  In 1286, the Archbishop of Canterbury founded a college in the area and many of the local buildings date back to this time, including The Red Lion Inn which was used for exterior shots of The Hand of Glory Inn for the film.

Near the picturesque village of Chilham, Chilham Mill provided the perfect backdrop for the charming scene where American soldier Joe sails in a row boat with the local children. The mill is the best preserved on the River Stour. It is said that the village itself was inspiration for the name of fictional village Chillingbourne in the film and if true, this would certainly not be the last time Chilham inspired filmmakers. A popular tourist attraction for the county, TV dramas such as Miss Marple (2006) and Poirot (1995) have filmed in the village.

The City of Canterbury steals the show at the end of the film as the setting for the dramatic parade of soldiers through the main High Street.  The city skyline is dominated by the stunning Cathedral which is the oldest in England. Canterbury is a place that is both steeped in heritage and tradition and a modern, bustling city. A Canterbury Tale (1944) gives a modern day viewer an insight into how the Second World War affected the city, but even with visible bomb damage, many of the streets used can still be recognised today. The Cathedral itself paid homage to the film in 2006 when it was screened in the Cathedral Nave.

A Canterbury Tale was released on Monday 21st August 1944 and is now available to buy on DVD.