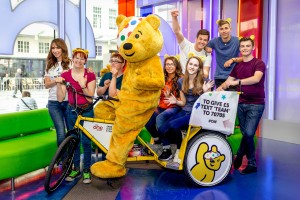 Returning in 2015 for its fifth year is The One Show Rickshaw Challenge, in aid of BBC Children in Need. With help from The One Show presenters Matt Baker and Alex Jones, six young riders embark upon an epic 470-mile journey pedalling a rickshaw.

Across eight days the team will cycle from Land’s End to the East End, beginning their pursuit on Friday 6th November 2015. The end of Day Six will see the team touch down in Brighton, before beginning the sixty miles plus journey to The Historic Dockyard Chatham the following day. The expedition will take the team through a number of towns in Kent, including parts of Tunbridge Wells, Maidstone, Chatham, Rochester, Gravesend and Dartford .

The cumulative total of money raised so far by The Rickshaw Challenge is over £7.9 million, all of which goes towards supporting disadvantaged young people in the UK.

Tunbridge Wells is a town in West Kent, home to a host of historic buildings, specialist shops, churches and a busy town centre. Productions which have previously filmed in the area include Britain’s Best Bakery (2012), Terry and Mason’s Great Food Trip (2015) and Hunted (2012).

Maidstone is the county town of Kent, home to a number of parks and shopping facilities, as well as The Maidstone Studios which is the UK’s largest independent High Definition TV studio facility. Productions which have filmed in the area include Take Me Out (2015), Later… with Jools Holland (2015) and Couples Come Dine With Me (2014).

Rochester offers beautiful cobbled streets, parks and the Cathedral and castle while Chatham is home to The Historic Dockyard Chatham, Day Seven’s final destination before Team Rickshaw makes their way up to Elstree to finally complete the challenge.  The Historic Dockyard Chatham is a popular filming location on account of its Georgian and Victorian architecture and authentic cobbled streets (which the rickshaw riders might be hoping to avoid!). The Medway area has previously been seen on screen in Jekyll and Hyde (2015), The Mystery of Edwin Drood (2012) and Sherlock Holmes (2009).

The town of Gravesend is situated in North West Kent, with exceptional transport links up to London. Gravesend has previously hosted productions including Babylon (2014), The Interceptor (2015) and Great British Railway Journeys (2014).

Dartford is situated close to Bromley and Bexley and boasts great travel links in and out of Kent. Full of quaint architecture and great guesthouses and hotels, Dartford has hosted other productions in the past such as Harry Potter and the Deathly Hallows – Part 1 (2010) and The Inbetweeners (2010).

Tune into The One Show on BBC One at 19:00, BBC One to follow Team Rickshaw’s progress from Friday 6th November until Friday 13th November, when the Children in Need Appeal Show will be airing.