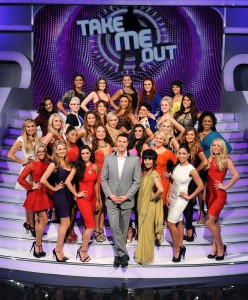 King of matchmaking, Paddy McGuiness, returns for the sixth series of ITV’s popular dating show Take Me Out, where 30 single ladies are all looking for their dream date on the Isle of Fernando with one of the eligible bachelors that arrive via the Love Lift.

The cheeky show sees four brave bachelor boys trying to impress the Flirty Thirty through various rounds, but with the shows catchphrase being “no likey, no lighty”,  the women turn their lights off when they are no longer interested in the man, and the boys could face a black out which precedes a lone departure to Celine Dion’s All By Myself.

The new series introduces a twist:  the men can choose to opt for a mystery girl based on the sound of her voice.First up are an IT consultant from Leeds, a Birmingham entrepreneur and a music student from Brighton.

The Maidstone Studios is the UK’s largest independent HD TV studio facility and is based in Maidstone, Kent.  The facility boasts 5 studios, a sound stage, post production facilities, storage and over 400 free parking spaces and has previously played host to productions such as Later…With Jools Holland (2013), Was It Something I Said? (2013) and Got To Dance (2010).

For more information about filming in Kent email: filmoffice@kent.gov.uk

For more information about Take Me Out visit: http://www.itv.com/takemeout/

For more information about The Maidstone Studios visit: http://www.maidstonestudios.com/